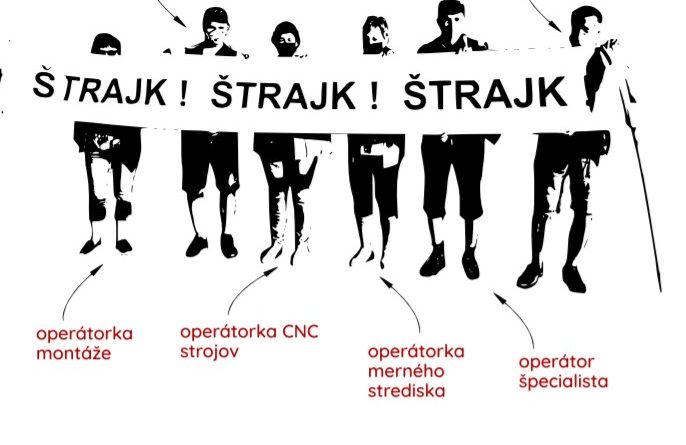 The globally active BOOSTER Precision Components GmbH has its headquarters in Frankfurt am Main.

BOOSTER Precision Components in Schwanewede near Bremen is responsible for the production of compressor wheels for exhaust gas turbochargers.

There is one factory in Mexico, two in Slovakia and one in China. In Beluša, Slovakia, the workforce went on strike last year demanding better working conditions.

The experience of the five-day industrial action was summarised in a nicely designed brochure of over 50 pages. The brochure was published in Slovakian and English. Now an edition in German has been published. The strike activists from Beluša are now looking for contact with colleagues in Germany. They sent us a box of the German language brochure and asked us to distribute it at the plant in Schwanewede.

We were there for the shift change. We were dealing with strong guys, more than half of them were migrants. They were curious, wanted to know where we were from and why we were handing out the leaflets, were friendly and almost all of them wanted a leaflet, one had one handed to him through the fence, another wanted two.

One was also very interested, but seemed less welcoming. We must surely have been dealing with someone from the management. He tried to question us. Several times he wanted to know if we were from the IG Metall union, which he probably wanted to bash on the head for it. But we were not from the IG Metall. He admitted that there was no workers’ council in the shop. “Why should there be, everything is fine here?” Instead there was an “employee representation” with which they “worked well together” – a body at the pleasure of the management without legal basis and co-determination rights. The management member simply claimed that the people were happy.

After he left, there were a few more discussions with the workers. They were much less enthusiastic about the company. There had been a workers’ meeting in the factory the day before. There they were promised a wage increase by 4%. This was probably the first collective wage increase in four years. And that with the current inflation. Some of them also have gotten an individual wage increase, probably according to a carrot and stick principle. One of them complained about how outrageous it is that a founding of a workers’ council had always been hindered when colleagues organised in the IG Metall had tried to establish one. We advised them to use the contact email in the brochure of the Slovakian colleagues.

Let’s see if we can be of further help in networking and possibly organising.