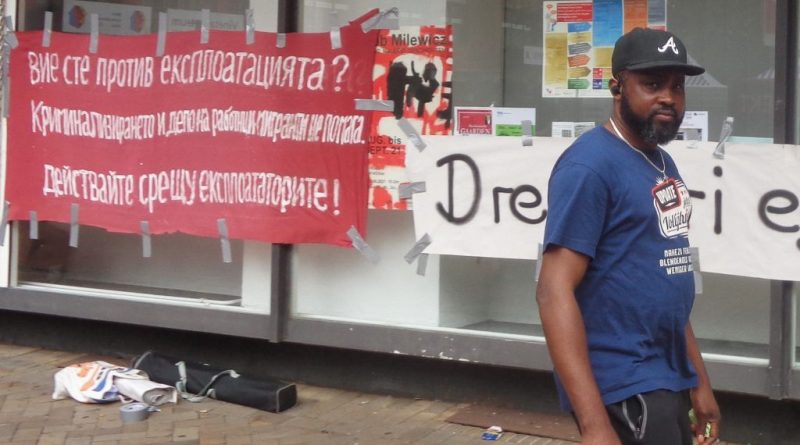 German media have been successful describing police raids against the migrant community as something positive.The call it measures against exploitation.It sounds positive, when the media reports describe the working conditions of migrant workers and high rents for terrible flats.People tend tot think, that the police action ends slave labour, exploitation and bad housing conditions.They do not know what is following these raids: The migrant workers are often charged and fined for breaking German labour laws through illegal jobs, working over maximum working hours, receiving social benefits, etc. Often they are being deported right away.

In Kiel we produced leaflets in several languages with a contact e-mail adress if people need information or support. We also had two banners: One in Romanian: “Equal wages and equal rights for all” and one in Bulgarian:  “Raids against exploitation? Stop criminalizing and deporting migrant workers! Go for the exploiters!”

Banners in East European Languages pulled the attraction of the people. We discussed this issues with migrants and Germans.

We want to remind of a raid in Bremen Groepelingen, a poor part of town with a high migrant population. This raid was called measures by the city council against dirty streets and criminal landlords. The raid had an extreme form. The streets were cordoned off with barrier tape. The Police didn’t even let schoolkids go to school. The police were accompanied by employees of various administrative bodies, such as the job center or the building authority. The raid had a clearly racist. The raid had a clear racist focus. German families did not get raided. Nationalities who are seen as half integrated (like Turkish or Iranian) were raided once and East European and African in many cases were raided a second time. It just took a day that the raided migrants found letters in their letter boxes that there social benefits were stopped. They were accused of subletting their apartment, when there were found other or more persons than named in the contract. This was not an action against criminal landlords or bad housing. It was an attack of the authorities against migrants. We have to counter the media.