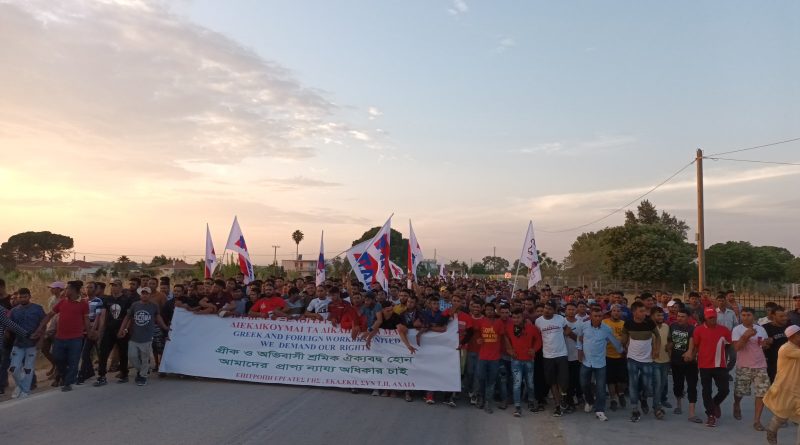 With a big rally and a militant demonstration from Manolada to the city of Barda, where they handed over a resolution with their demands to the Mayor thousands of migrant land workers, having at their side PAME and the class unions but also workers from the surrounding areas and Patras, sent a big, dynamic message demanding for the satisfaction of the fair their demands.

On Saturday, June 4, after a call of PAME, the Struggle Committee of Migrant Land Workers, the Regional Trade Union Centers of Patras and Amaliada, the Federation of Workers in Food Sector, thousands of migrant land workers rallied in Manolada under the slogan “Greek and Migrant Workers United We fight for our rights” in Greek, English, Bengali and Urdu.

This was followed by a long march from Manolada to Barda, where with the thousands of migrant land workers who started, others joined in from the strawberry fields, where they producing the “red gold”, strawberries for a handful of capitalists. Their slogans were heard throughout the Ilia plain as the march moved along the old highway. They shouted for a better life, legitimacy – papers, amid applause and enthusiasm.

PAME stated: PAME welcomes the great river of struggle and claim, life and survival of migrant land workers, who by the thousands flooded the streets from Nea Manolada to Barda, side by side with the Greek workers demanding:

This huge demonstration, the joint march of Greeks and immigrants shows the strength of the organization and Solidarity. The migrant workers sent a message that together with the Greek workers, they will not stop claiming their rights.